We keep an indoor garden year round, growing mostly herbs but also some greens. We don't have an elaborate setup, just a couple shelves positioned at western and southern-facing windows with inexpensive grow lights attached. 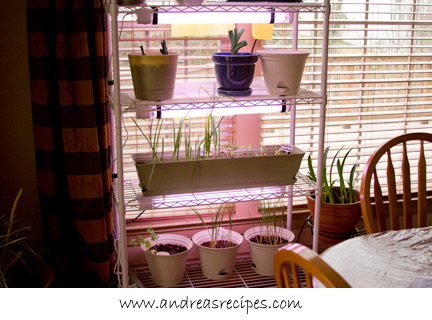 We run the lights from sunset to sunrise to help give the plants plenty of growing time and warmth. 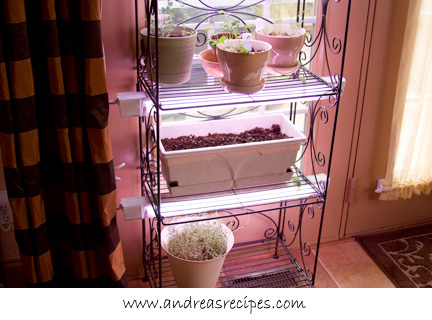 This year we are growing basil, cilantro, mint, thyme, dill, parsley, romaine lettuce, butterhead lettuce (just seeded after spinach crop failure), scallions, and leeks. We also have a bay laurel in a pot, and although it's twice as large as it was in the spring, it won't be ready for another few years. 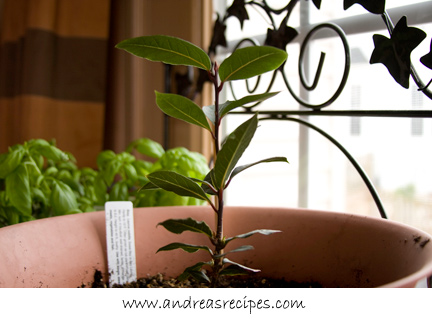 I've not had success growing tomatoes indoors, but I'm going to keep trying until I get it figured out, and I'm still tempted to try growing a Meyer lemon tree indoors. In the spring I plan to put some ginger in a pot, too.

Lately I've been experimenting with growing herbs and vegetables by sprouting. Sometimes it works well, for examples with scallions, mint, and leeks. For these leeks I saved the bottom inch of white along with the roots and just stuck them in pots to see what would happen. The leek in the blue pot went into dirt about 10 days ago and the two smaller ones went in one week ago. Just like the green onions, they started to sprout within a few days. It's so easy, just make sure the roots are still white and not dried out, form a hole a couple inches deep, and stick the piece of leek down in deep. Cover with dirt, add a little water, and keep in a sunny spot. 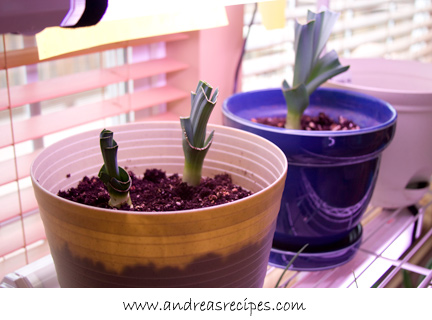 I've been tagged multiple times for the 5 Things/6 Things/7 Things memes, and though it's been a while since I've done a meme I thought I would answer with 7 things so it it will qualify for all of them. Thanks to Jennifer and Nate & Annie for tagging me! (Actually, I think someone else tagged me at some point, but I lost track of the email, so I do apologize for forgetting!)

7 Random Things About Me

1. My bachelors degree is in music education (vocal/choral), and I still love to sing torch songs, vocal jazz, and acapella choral music.

2. I grew up loving horses and enjoyed riding until I had an accident while on vacation in Australia. Permanent back problems since.

3. I held a part-time job at Arby's during my freshman year in high school, and I still like the jamocha shakes.

4. I choreographed and directed music for a high school production of 42nd Street, tap dancing and all. (But don't ask me to tap dance now, it would be quite scary.)

5. I am the oldest sibling in my family, with one sister and two brothers.

6. My favorite tea is Earl Grey, with milk of course.