We’ve had a very busy spring full of building raised beds, transplanting herbs to their new home, planting seeds, planting trees, planting new edibles, ripping out inedible ornamental bushes and replacing with edibles. It seems like we’ve hardly had time for a break on the weekends, and we still have more to do. It’s a lot of work but we’re already enjoying the fruits of our labors.

After two years of being in the house we finally decided on the location for our raised garden beds. The first year we had a container garden, then last year we ripped out a bunch of inedible bushes on the south side of the house and planted tomatoes, tomatillos, peppers, and herbs in about 48 square feet of space. This year we added 132 square feet of raised bed space and about 50 more square feet where the apple and cherry trees and blueberry bushes are planted. Still had plenty of room for the rhubarb and horseradish that’s coming back from last year.

Before building we took some scrap boards and laid them out where the beds would go so we could get a visual idea of how it would look and test the width between them to make sure we would have plenty of room to walk, turn, and bend. 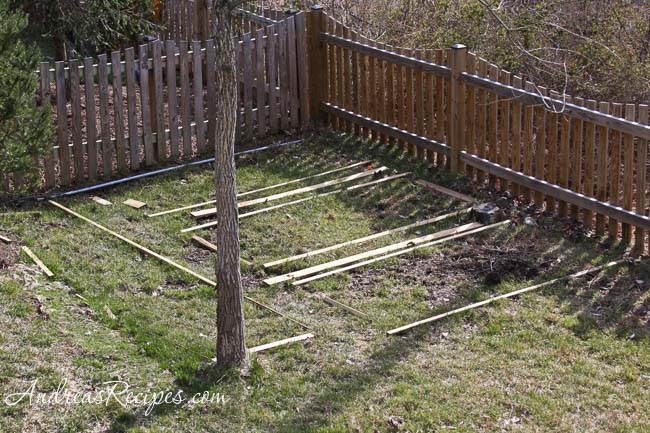 We used 1x4 and 1x6 cedar planks. No plans, Michael just had a vision and went with it. It’s the whole engineer thing he’s got going on. 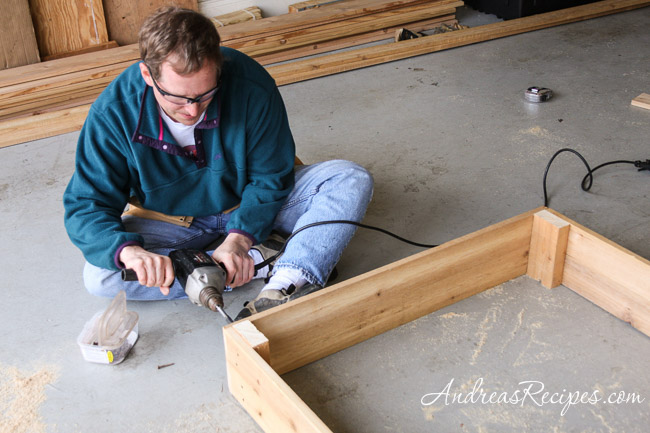 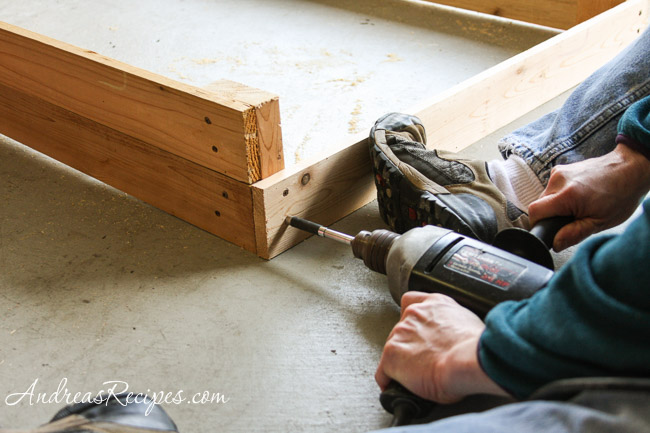 It took about 4 hours to build the frames. Once we had them built, we put them in place per our original design, but then changed our minds and rotated two of them, as you’ll see in the photo below. This allowed us to have at least one bed positioned lengthwise next to the back fence, which we’ll use as a prop for beans.

The bed on the far left (we call it #1) is the herb bed, and because of the ground slope we had to partially bury the one side where you can see a gap beneath it. 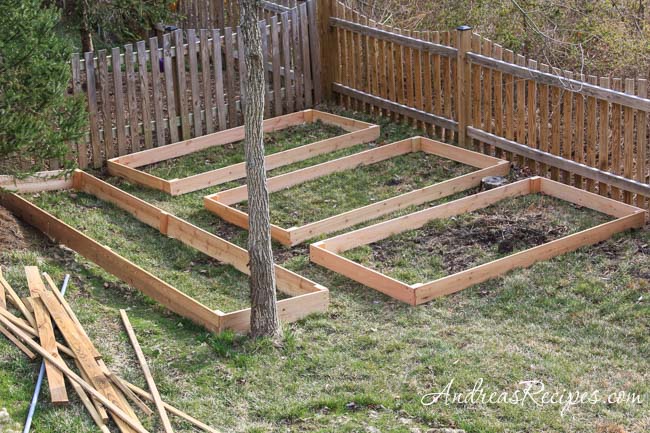 The next day Michael dug out as much of the grass as possible and relocated it to some barren parts of the yard, then we filled in the beds and began transplanting the herbs from their previous location.

The bed in the corner (#3) has snow peas and sugar snap peas along the back fence, but those won’t last once the heat turns up in June, and we’ll replace them with beans. The bed in the middle (#2) is the spring bed, with scallions, shallots, arugula, chards, beets, more tatsoi, spinach (not doing well), and lettuces. The other bed with the pitchfork standing in the middle (#4) has some bok choy seedlings and will eventually be used for zucchini squash. 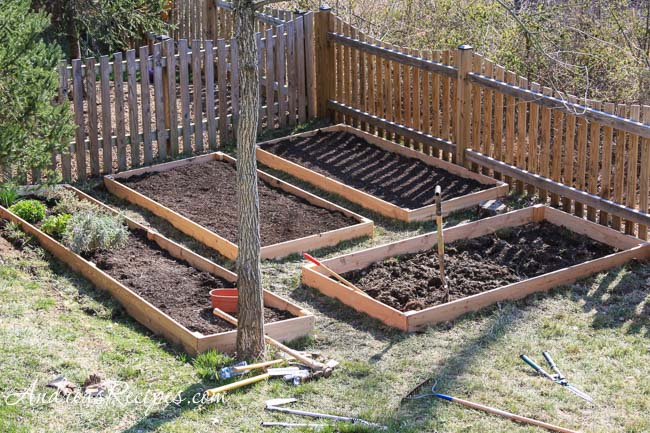 PLANTING THE APPLE AND CHERRY TREES

Last weekend we spent two days working the other end of the yard and digging holes for our new apple and sweet cherry trees. The soil is clay and very rocky, and it was a mud pit from all the rain we’ve had. We kept sinking into the mud while working, and we were covered in mud by the time we got those holes dug. Michael wielded the shovel and pick axe while I lugged rocks out of the way. All those boulders you see in the photo are natural parts of the yard, not introduced, and some of them were hidden underground, waiting to surprise us when we tried to plant stuff. There’s more below ground, but many are so big we can’t dig them out, so whenever we find a really big one we just dig under it so it will fall further down in the ground, then we plant around them. 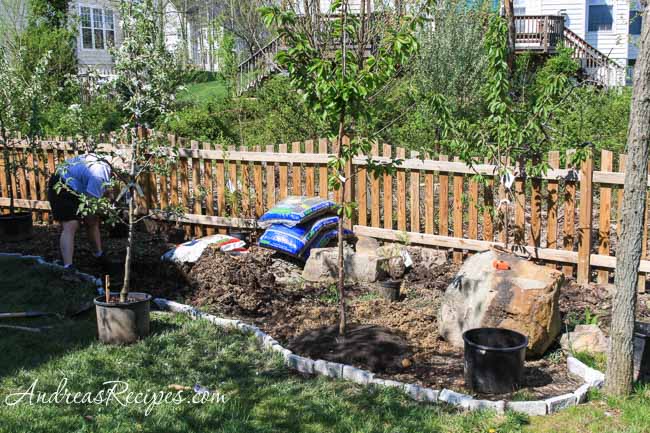 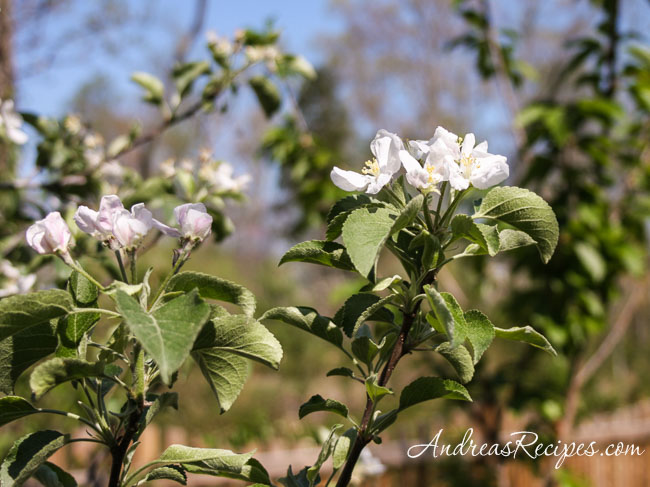 Blueberry blossoms. The plants we bought are a couple years old so we may get lucky and have a small harvest this year. We put in several different types for cross pollination and to spread out the harvest from early spring to late summer. 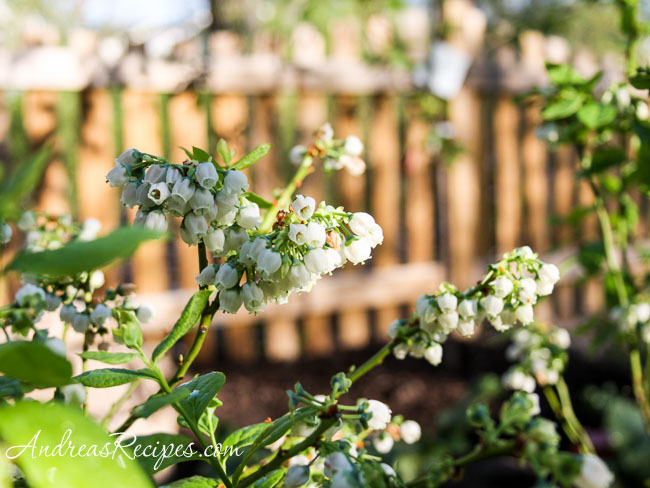 Chive blossoms. The chives came back in March and are robust and in bloom now. 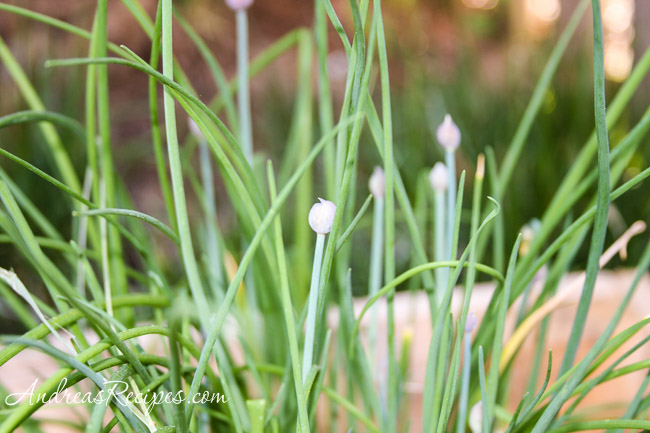 We planted the tatsoi last autumn but it never sprouted until March. It stayed a tiny little seedling for several weeks, then when we had that hot 90+ weather last week it went from just a couple inches tall to this monster. (That’s some butterhead lettuce planted next to it.) We’ve enjoyed stir-frying the leaves and will plant more in September. It does well in our garden, certainly better than the spinach that never seems to get beyond the seedling stage, and when the leaves are small and tender you can eat them raw in salads. 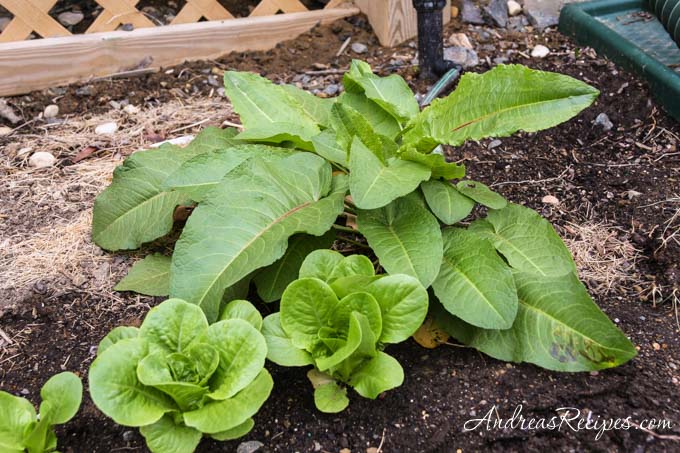 This crazy little patch of butterhead lettuce popped up last month. There’s probably twenty plants in that bunch. I spilled the seed packet in this general vicinity last autumn, and though I tried to gather them all up, obviously I missed more than a few. I picked some of it for salads this week, but there’s still a fair amount left. 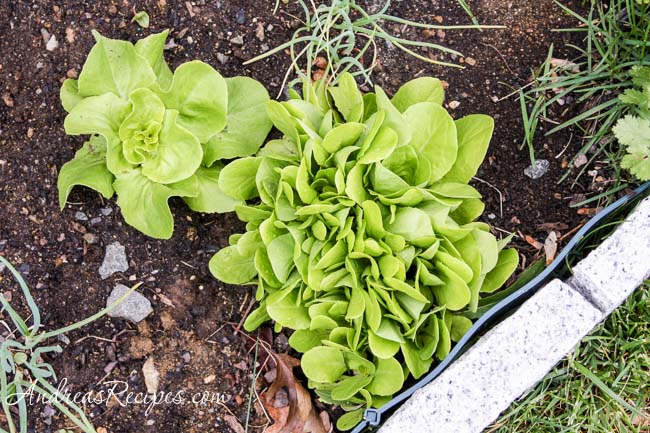 Snow pea and sugar snap pea plants are growing. I use the snow peas in stir-fry and I just like to munch on sugar snap peas. Obviously I need to wait a little longer before I can just walk out and grab a few peas off the vine. 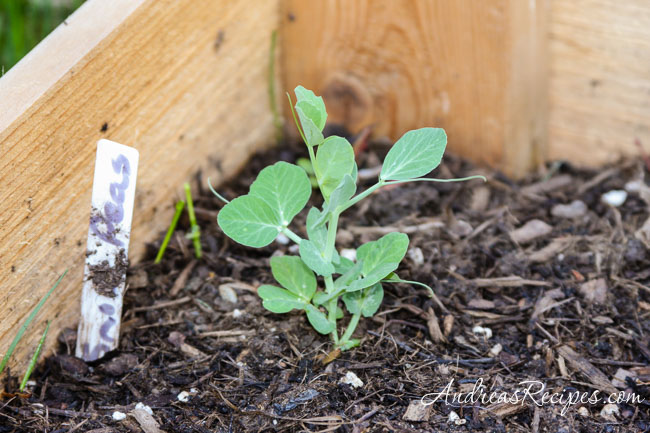 When the mint started to green again, we dug it up out of the garden and potted it, and now it lives on the deck. To keep it from taking over the garden last summer, we planted it in a landscapers plastic pot and buried it to within one inch of the top. It prevented the roots from spreading and encouraged more vertical growth, making it quite leafy. When we dug it up we saw that the roots had split the pot and I had to break it to remove the plant, then we took a shovel to the root ball and cut away half of it. Yes, this mint plant is a monster, too, but I like the flavor in tea, ice cream, jelly, mojitos, and other tasty things. 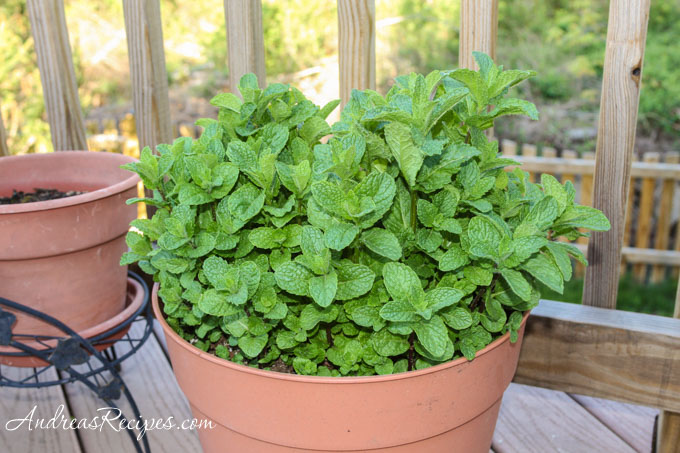 More gardening coming in the next few weeks as we start planting the summer vegetables and herbs. We have a number of seedlings hanging out in the house, waiting for the nights to warm up and I added some more plants to the collection today. I can't wait to get everything in the ground! 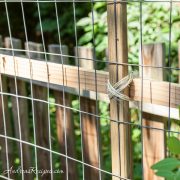 Build a Trellis for Beans and Peas (Weekend Gardening) 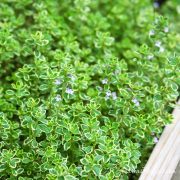 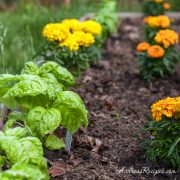