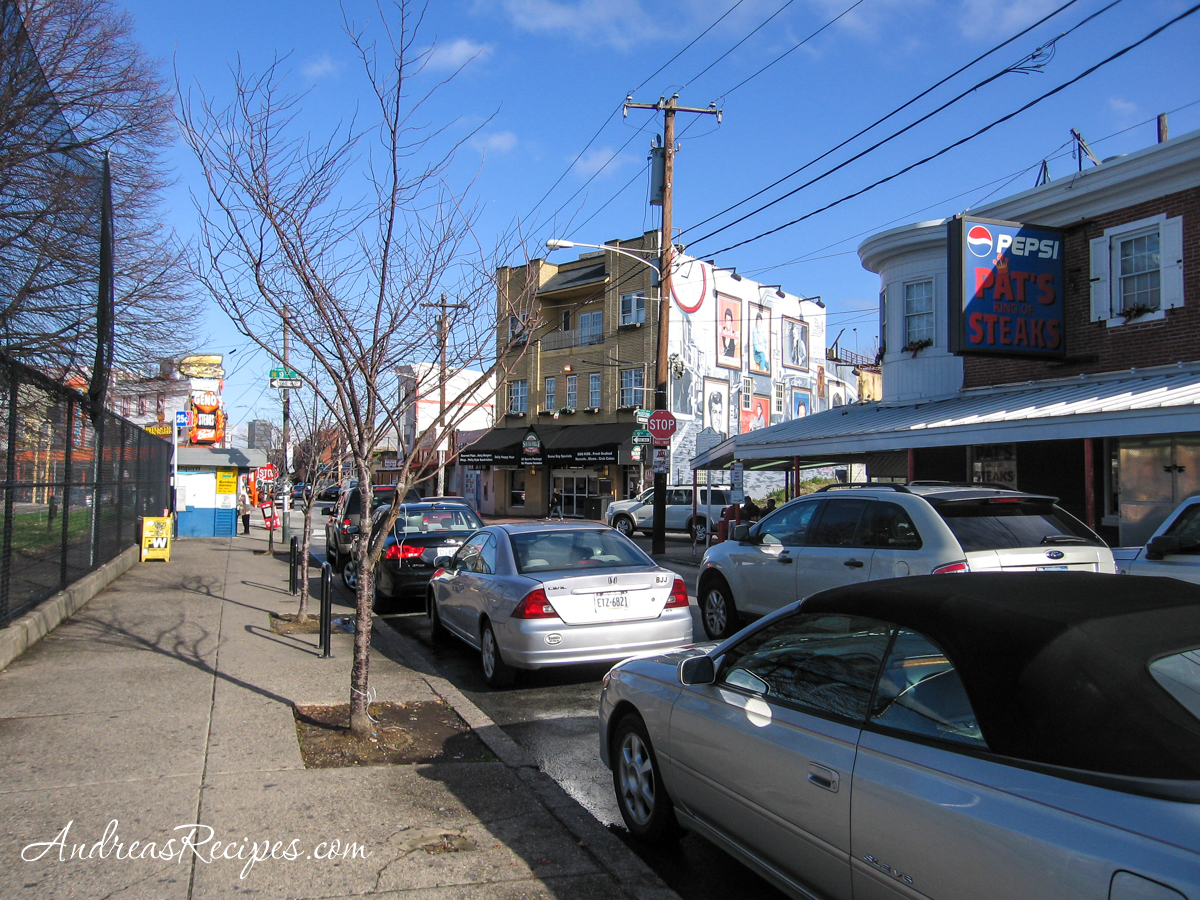 During a December business trip to Philadelphia with friend and fellow carnivore Garth Jenson, I realized the shipyards where I was giving a briefing was a mere three miles from what many would consider the Mecca of cheesesteaks, the quaint part of the city where two world renowned competitors stake their turf across a busy intersection. Garth and I couldn’t let this opportunity pass by. We had to settle the matter for ourselves: which was better, Pat’s King of Steaks or Geno’s Steaks. Both are open 24 hours a day seven days a week, which makes you wonder how many cheesesteaks they sell at 4 a.m. on a Sunday.

We were lucky enough to find a spot along the park across the street from Pat’s. The air was crisp but that didn’t sway the faithful from making the pilgrimage to the land of beef and cheesesteak. A bit of reconnaissance was in order since we didn’t want to look like the newbies we were. We quickly scanned the menus and listened to a series of regulars walk up to the window and order. To slow down the process in front of a line of hungry people is definitely frowned upon.

We decided to make the bout as fair as possible. Garth would order one cheesesteak and I would order the other, then we would split them so both could savor what Pat’s and Geno’s had to offer and make our own decision. 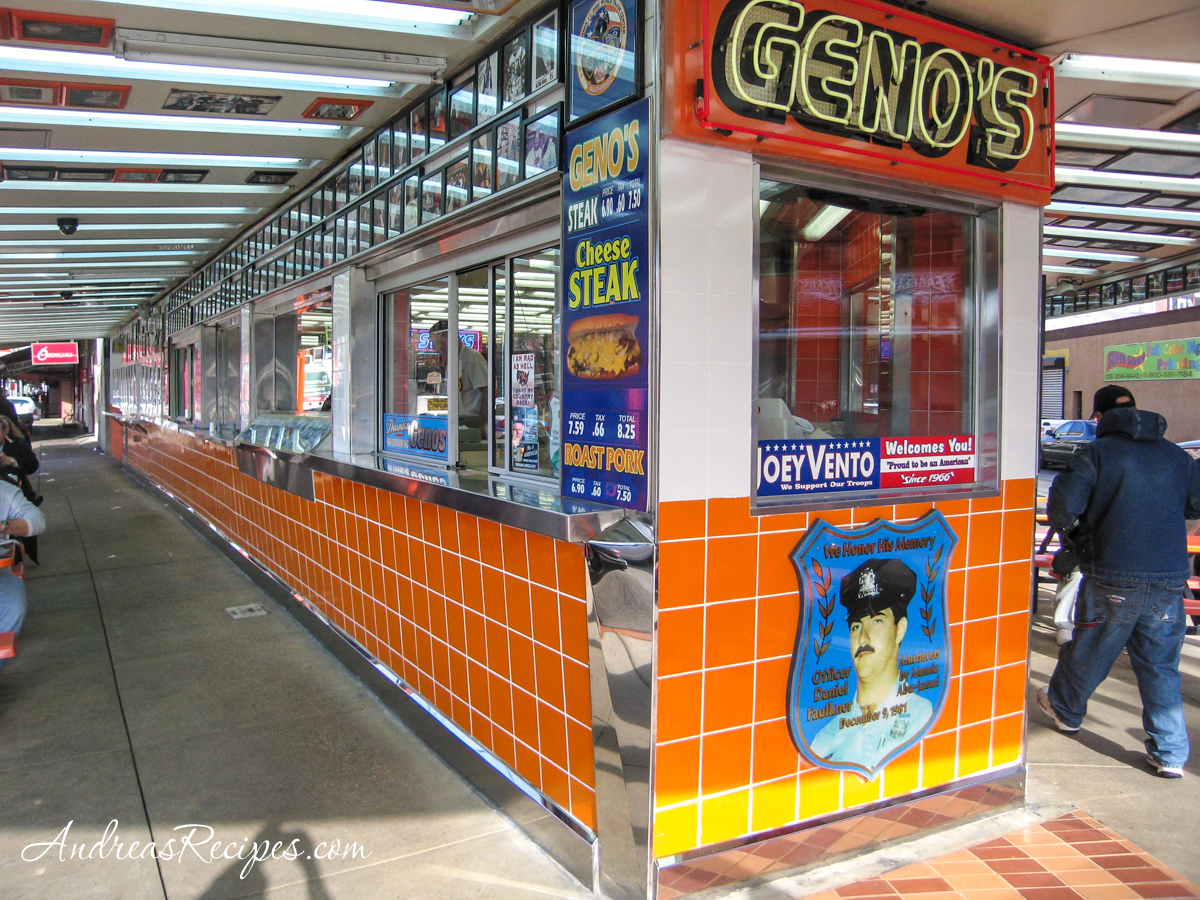 We went to Geno’s first. Like its website, Geno’s is flashy: the sign is bigger than Pat’s, they have a police memorial walk, and the inside of the overhang is lined with pictures of the famous and slightly famous smiling with the owners or workers. Garth ordered a “Wiz wit,” which for those in the know is a cheesesteak with Cheese Whiz and onions. Before going on this trip I had surveyed the office and gotten opinions about whether to go with cheese slices or the Wiz, and based on the responses I determined the Wiz was more authentic, and Garth agreed. The Geno’s cheesesteak order came out about as fast as Garth paid. 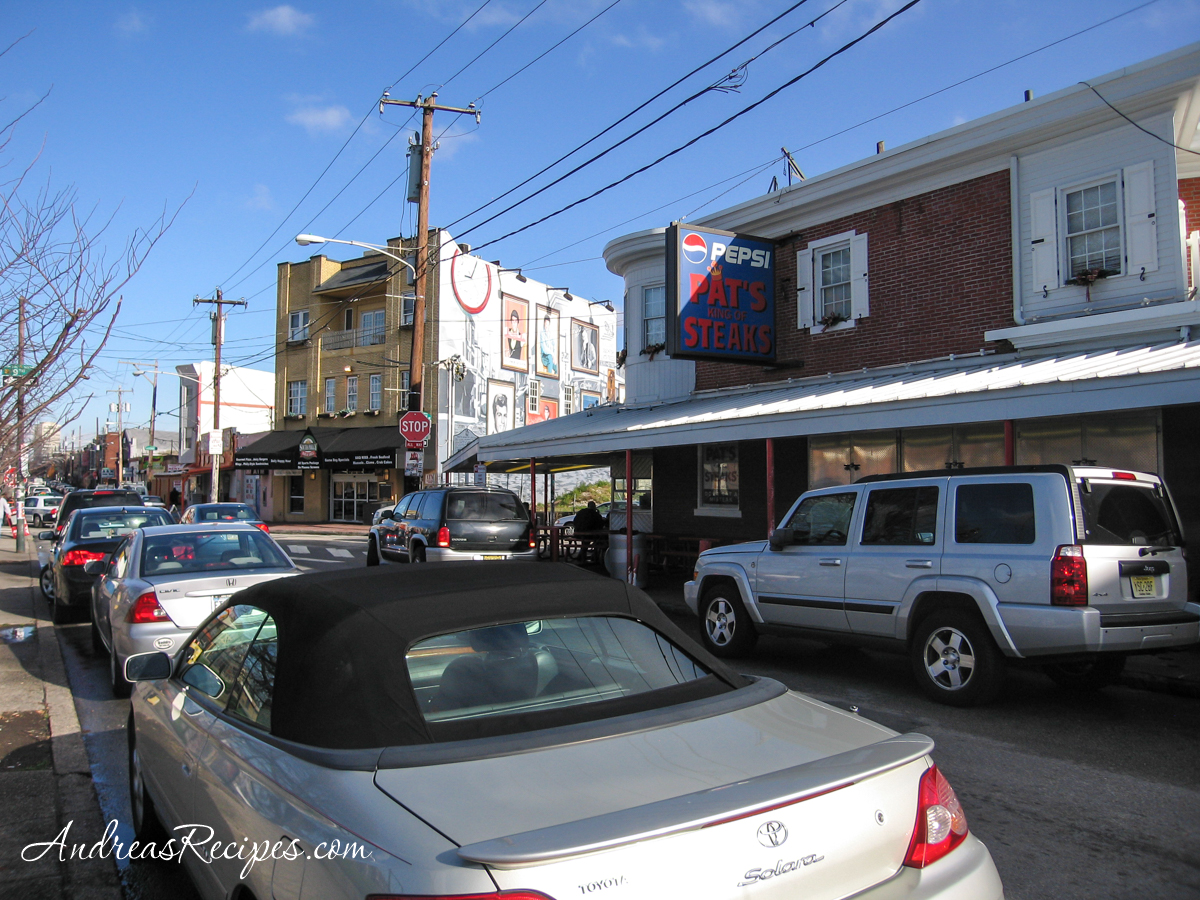 We then crossed the street to Pat’s, which is less glitzy than Geno’s. I ordered a Wiz wit and then asked about a drink and was motioned to the window to the left. Seems they have the process down to a science and use the same procedure whether you are the only person in line or there with a hundred new friends. The Pat’s cheesesteak came out open faced and appeared to have twice the meat of the Geno’s version. Both were the same price, $8.25. We later learned that Geno’s hollows out their buns which would account for the apparent difference in size. 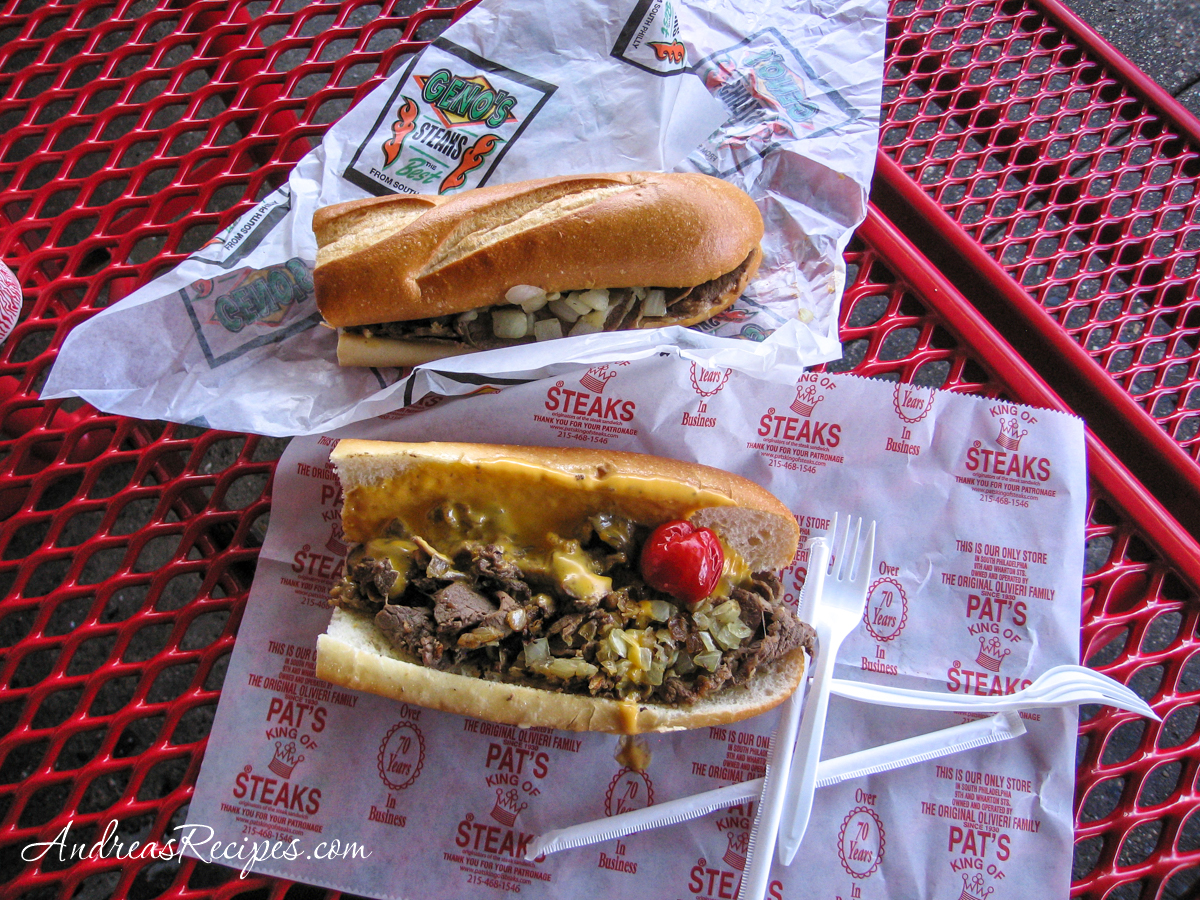 We sat down at one of the red metal picnic tables and laid the competition side by side. Since neither offered knives, we had to make do splitting the sandwiches with two plastic forks, not so easy when you are starving, so bring a knife if you plan to do your own throwdown.

First the Pat’s cheesesteak: they say it’s the bun that makes the difference in getting a cheesesteak in Philly and a replica anywhere else. Pat’s bun seemed Italian and had a thin crunchy layer to it. The Wiz was light and not overbearing, the steak was thin-sliced and juicy but not dripping like an Italian beef sandwich you get in Chicago. One thing Pat’s offers that we didn’t see at Geno’s was a pepper bar, with both the round Italian and what looked like thin Thai peppers, as well as mustard and catsup squirt bottles. I slid in a couple of the Italian peppers which was a nice addition of texture and flavor.

Now the Geno’s cheesesteak: the bun is also Italian in style with three slits in the top. The bread was soft but didn’t give when you bit into the sandwich like the Pat’s version did. The amount of Wiz was slightly less than Pat’s, and the meat was more prominent. Garth and I both agreed the meat had more flavor to it, as if beef stock was added during cooking.

In the end it was close, but Garth and I agreed Geno’s edged out Pat’s slightly due to the flavor of the meat. We’ve heard there are better cheese steaks in Philly, and that may very well be the case, but that will have to be a future throwdown which both Garth and I are eager to take on. 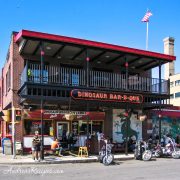 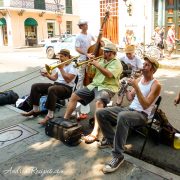 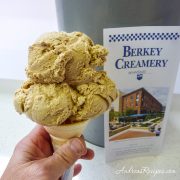