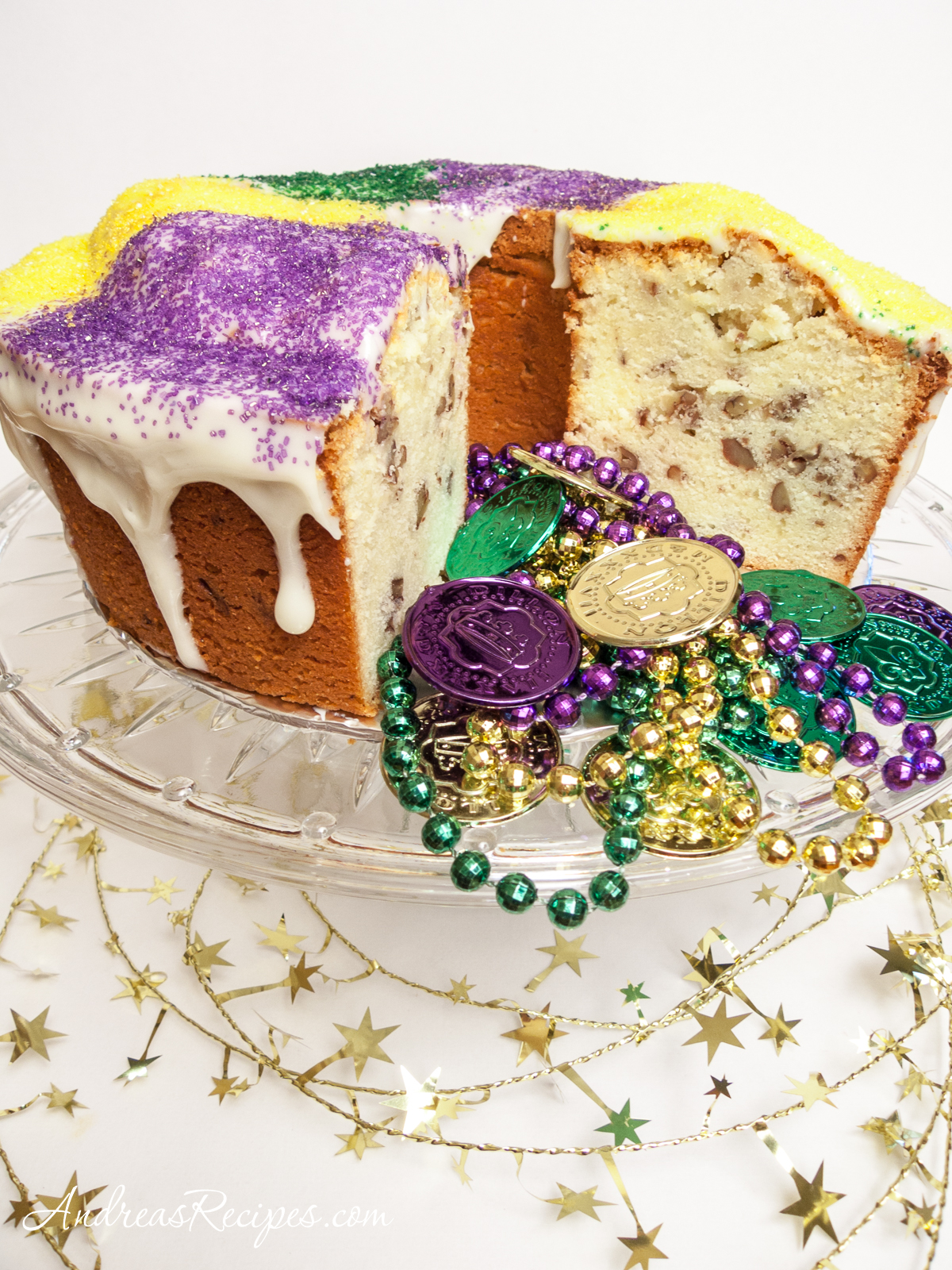 Mardi Gras king cakes make a festive centerpiece for any Mardi Gras celebration. The traditional cake is made from a soft yeast dough that is risen, rolled, and often filled with cream cheese, fruit, or a pecan praline mixture. Many people have fun celebrating Mardi Gras, even if they don't go to New Orleans, but I've heard friends say that they want a cake that is easier to make. After mulling the idea for a bit I decided that I would make both a traditional rolled king cake and a simple pound cake and decorate both in the traditional Mardi Gras colors to show that a festive Mardi Gras cake can be easier to make. I knew that I wanted to have pecans in the cake in some way, perhaps like a streusel, so off I went in search of the perfect pound cake with pecans for my Mardi Gras cake. I stopped searching when I found this recipe from Southern Living.

The cream cheese makes the texture moist and rich, and the bourbon adds just a touch of flavor that makes it feel a little more decadent without being obvious. Actually I was worried about the bourbon since I don't care for the flavor by itself, but once I had a taste of the batter, I felt we had a winner. Bourbon has a strong taste, but once mixed in with the rest of the ingredients, the strong flavor disappears and leaves behind a perfume that works nicely. To top it off, I added a simple cream cheese glaze and the Mardi Gras colored sugars.

Like a true pound cake, this recipe has no chemical leavening, and whipping the cream cheese, butter, and sugar adds air to help rise the cake. After getting the base fully whipped, take special care when adding the eggs and the remaining ingredients, as over mixing can leave you with a flat cake. I think mine was borderline, but still pretty good.

The original recipe calls for a 90 minute baking time at 325° F, but my oven thermometer showed that the oven was cooler than that, and the cake was nowhere near done at 90 minutes. I continued cooking 5 minutes at a time, checking the cake to see if the middle was cooked yet. Finally after 18 additional minutes the cake was fully cooked with a firm, moist crumb and a golden, slightly crispy exterior. I used a regular tube pan, but a heavier nonstick pan might cook the cake faster. I suggest checking the cake and watching it carefully to make sure it cooks properly, and at best I can only say that the cooking time is a suggestion. Still, we thought the cake was worth the little bit of extra effort in baking.

I found the colored sugars at A.C. Moore in the cakes and candy section, but I've also seen them at Party City and Michael's. 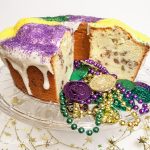 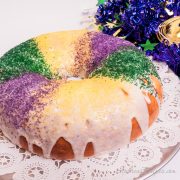