Thanks to everyone who participated! This month our entries come from Brazil, Philippines, Netherlands, Greece, and the United States, and as always I have fun visiting the sites and reading the stories.

The news for this month is I changed the arrangement of the round-up a little bit, as you'll see below. Trying to make it work the other way was a nightmare each month, and I was coding the round-up by hand in Textpad and copying it over and praying everything would align properly when I clicked publish. So I think we'll stick with this...much easier and the images are larger. So going forward please send your photos in 200x200 pixel size (no more than 200 pixels in either direction). I've modified the instructions on the Grow Your Own page as well.

Grow Your Own #10 is off and running. If you are new to the event, visit the Grow Your Own page to learn more about it. Deadline for entries is the 28th of every month and I post the round-up a few days later, around the 1st of each month. 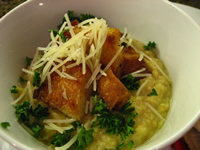 Jessica of Finny Knits (California, United States) fell in love with Farmgirl Susan's beautiful artichoke soup and made her own version of it with homemade croutons using the parsley that is growing like crazy in her yard. 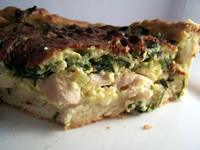 In the Netherlands, Dennis of Kookjegek made a puff pastry quiche with endive and chicken and flavored it with his homegrown chives.

Gay of A Scientist in the Kitchen (Philippines) made some simple comfort food out of rice that was shared with them during the rice harvest, a practice known as patilaok. 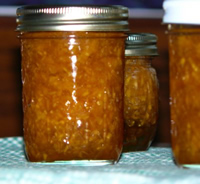 In Texas, Deb of Austin Agrodolce took advantage of a bumper crop of loquats and made jam out of her harvest. She also used some of the fresh loquats and combined them with strawberries to make a pork loin sauce. 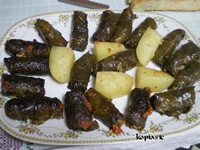 Using fresh grape leaves from the family vines in Sparta, Greece, Ivy of Kopiaste made some beautiful and healthy baked dolmades with arborio rice, fresh herbs, tomatoes, and potatoes.

In Brazil, Cris of From Our Home to Yours used some lovely zucchini (courgettes) that she got at her in-laws organic farm to make a tasty salsa. 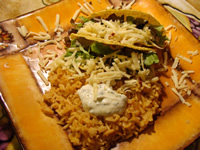 Kim of Live Love Laugh Eat (Virginia, United States) made fish tacos and garnished them with some of the fresh lettuce from her garden.

In California, Todd and Diane of White on Rice Couple used Thomas Keller's recipe from The French Laundry Cookbook and made a gorgeous red beet ice cream using the tiny beets they've been growing in their garden.

Jaden of Steamy Kitchen (Florida, United States) fell in love with her new Cooking Light cookbook and was inspired by a recipe that called for quail, but instead she turned it into the grapes and grappa recipe into a warm salad using fresh greens from her garden. 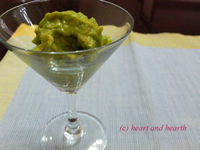 In Manila, Philippines, Ning of Heart and Hearth made a sweet avocado trifle using the purple avocados from the tree in her mother's yard, a tree her mother saved from being chopped.

Denise of Chez Us (California, United States) was feeling under the weather and this spicy crispy Thai chicken perked her right up! She served it with red leaf lettuce from her garden. 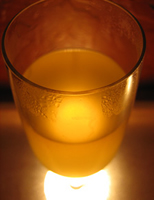 Hank of Hunter Angler Gardener Cook (California, United States) hunted a wild turkey and used all the parts. The carcass went into a pot along with fresh vegetables from his garden and he made a rich wild turkey broth. 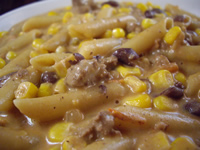 Using the salsa she put up last summer with some of the tomatoes from her yard, Becke of Columbus Foodie (Ohio, United States) made a tasty taco skillet with pasta, beans, and beef. 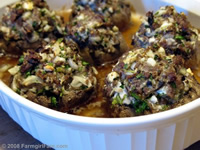 Susan of Farmgirl Fare (Missouri, United States) made her first ever stuffed mushrooms with her mother using some ground lamb from their flock. 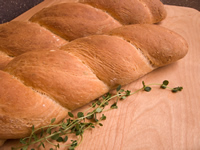 And for my contribution this month, I made an Italian herb bread (pane alle erbi) shaped into a twist and flavored with fresh basil and thyme from our indoor garden.