Thanks to everyone who sent in a post for June. We had 19 participants from 4 countries, and as always had an abundance of fresh foods to work with.

Before we do the round-up, I need to make a few announcements. July is the 12th month for Grow Your Own, and next month is the first anniversary! Because we are getting into the busiest growing and harvesting months for folks in the north, some very smart bloggers suggested we hold the event more frequently to give people more chances to participate. I think it's a great idea, so starting today, we will hold the event twice a month. The new deadlines are the 15th and the 30th of each month, and round-ups will be posted within a few days of the deadline.

I really enjoy Grow Your Own, and I see signs of the event catching on around the blogosphere, so I think it's time for me to share the love and give others a chance to host. If you are interested in being a host for Grow Your Own, please email me directly and I will add your name to the list. I'll create a hosting page which will have the list of hosts as well as information about hosting. To make this as fair as possible, you must have participated in the event at least one time before you can host.

If you are new to the event, visit the Grow Your Own page to learn more about it. If you have a blog and like to write about things you grow and cook, you can join in the fun! You don't have to write a food blog to participate, just have some kind of blog and enjoy writing about things you grow, raise, hunt, or forage, and the dishes you make with them. We also have a Flickr photo pool, so if you have participated in the event and want to join the Flickr group, please let me know.

UPDATE: Every once in a while I miss a post, and I'm afraid I did it to Todd and Diane of White on Rice Couple. They submitted a beautiful heirloom tomato salad using their homegrown shiso and tomatoes they saved from a possum that scavenged around their garden while they were away. Fortunately White Jaws, The Garden Guard Dog is back to defend against all garden attackers. 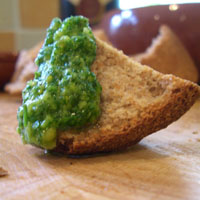 In the UK, Alex of Just Cook It! had a glut of rocket (aka arugula) in his garden and was concerned it would all be lost before he returned from vacation. He used a bunch of it and made a fresh rocket pesto.

Deb of Austin AgroDolce (Texas, United States) had a garden full of basil starting to flower, so she made her first ever batch of pesto and now has lots of plans for it! 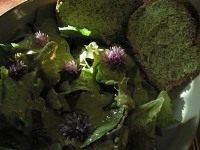 Natashya of Living in the Kitchen with Puppies (Ontario, Canada) gave us a two-fer, a creamy salad dressing and a whipped herb butter using some of her fresh herbs from her small suburban garden. 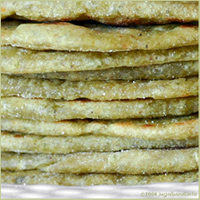 Using some of the fresh bergamot mint from their garden and sourdough toss off, Bee and Jai of Jugalbandi (Northwestern United States) made some beautiful paneer mint parathas. 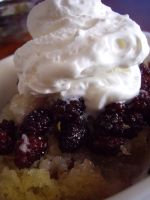 When Becke of Columbus Foodie (Ohio, United States) discovered she had a mulberry bush growing in her back yard, she gathered up some of those precious berries and made a tasty mulberry cobbler. 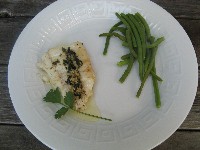 Wynter of Wynter's Musings (Washington, United States) received a gift of 43 pounds of fresh caught fish (!) and is trying to be creative with all of it. She grilled up some halibut and served it with a cilantro garlic butter made from the fresh cilantro growing in her garden. 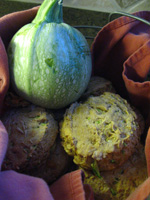 After ripping out her zucchini plants because they were taking over the garden, Jessica of Finny Knits (California, United States) had a zucchini dilemma. She used some of her treasure trove to make those zucchini cheddar biscuits, but she's still wondering what to do with the rest of it! 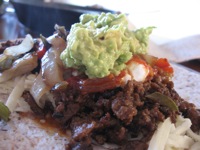 Tacos always taste better when made with homegrown ingredients, and Sara of The Farming Life (Ontario, Canada) uses her homemade salsa made with ingredients from her organic sustainable farm. Just don't ask her to add cilantro!

After harvesting some of her bok choi, Victoria of Feed Yourself (Washington, United States) cleaned it off right in the yard and tossed some in a skillet with black bean sauce and chili paste. 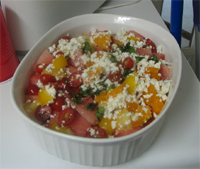 Jennifer of Northside Food (Georgia, United States) tossed together some fresh watermelon, heirloom tomatoes, and some feta cheese along with some of the fresh Thai basil from her garden and made an easy and healthy summer salad. 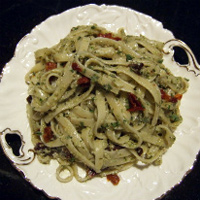 Pairing some of her homegrown basil with fresh arugula, Michelle of Big Black Dog (Illinois, United States) whipped up a pesto with sun-dried tomatoes, pecans, and pine nuts.

Determined to come up with a healthier salad for cookouts and barbecues, AS of Life's Too Short for Mediocre Chocolate (California, United States) created a variation on tabbouleh using quinoa instead of bulgur wheat. She also came up with some tasty variations! 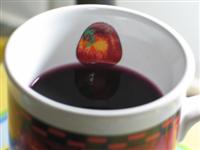 It's winter in Brazil, and Cris of From Our Home to Yours (Sao Paolo, Brazil) made a hot punch spiced fruit punch flavored with fresh ginger from her parent's garden. 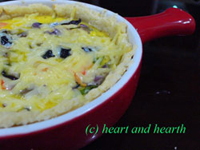 Ning of Heart and Hearth (Manila Phillippines) started growing her own leeks by saving the roots and one inch of the stem and planting them. She now has leeks and added them to a beautiful quiche with prawns, and mushrooms.

Denise of Chez Us (California, United States) used some of the fresh sugar snap peas growing in her garden and made a simple noodle dish with a kombu flavored broth.

For her garden lunch, Kitt of The Kittalog (Colorado, United States) sauteed some of her fresh homegrown chard with garlic and shallots and them added some chicken stock and served it over bowtie pasta. 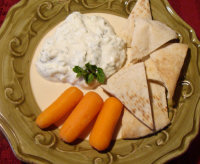 Kim of Live Love Laugh Eat (Virginia, United States) still has dill in her garden, though it won't last for much longer in the heat. She chopped some up with her fresh mint and made tzatziki, a simple and healthy appetizer.

I think tatsoi must be the new food rage because I keep reading more and more about it. Rachel of The Crispy Cook (New York, United States) has some growing in her garden, and she used it to make an Indian-inspired dish with fresh mushrooms and a mixture of spices. 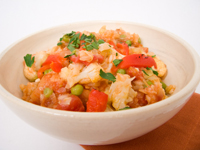 And my contribution in June was a vegetable (vegan) paella with tomatoes, roasted peppers, cauliflower, and flavored with fresh Italian parsley from our garden. I'm hoping to make this again soon with many more fresh vegetables from our garden!