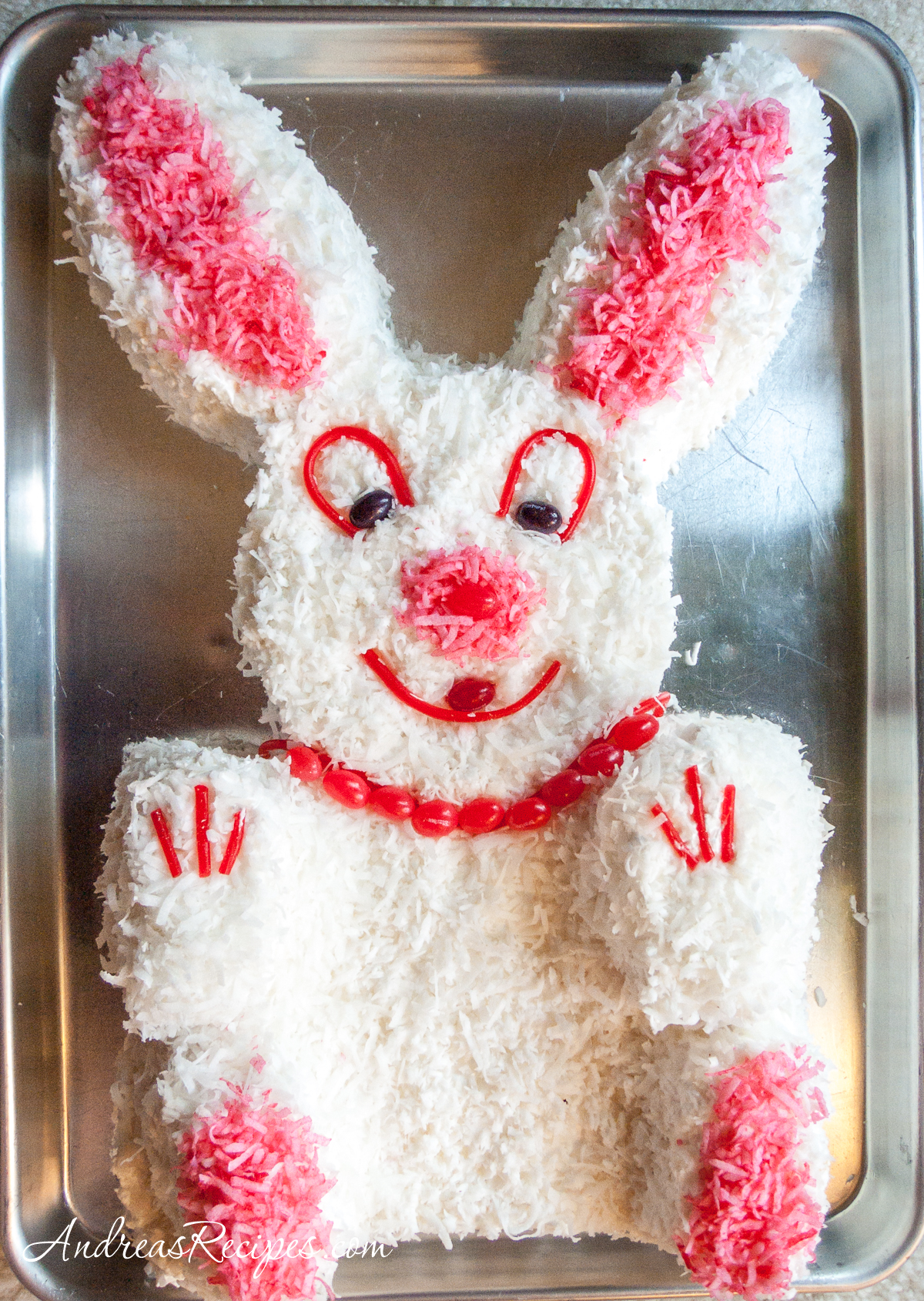 When I was a little girl, my mother used to make a bunny cake for us at Easter. She cut the instructions for assembling the cake out of Parade magazine in 1968 (photo below), which showed a finished cake as well as diagrams for cutting two round cakes into the shapes necessary to make two ears, a head, body, and four paws, and for assembling the pieces. She saved the instructions in her recipe box, carefully folded and taped to hold it together, but it's been many years since she made one. Now that I have children and we go to visit my parents around Easter time, she decided to revive the tradition and on Sunday we all made a bunny cake together. The boys were very excited about the cake, and my oldest helped with the decorating. Let's just say there was lots of coconut everywhere! I don't remember ever helping my mother make the Easter bunny cake when I was young, so it was especially heartwarming for me to watch my children help her. 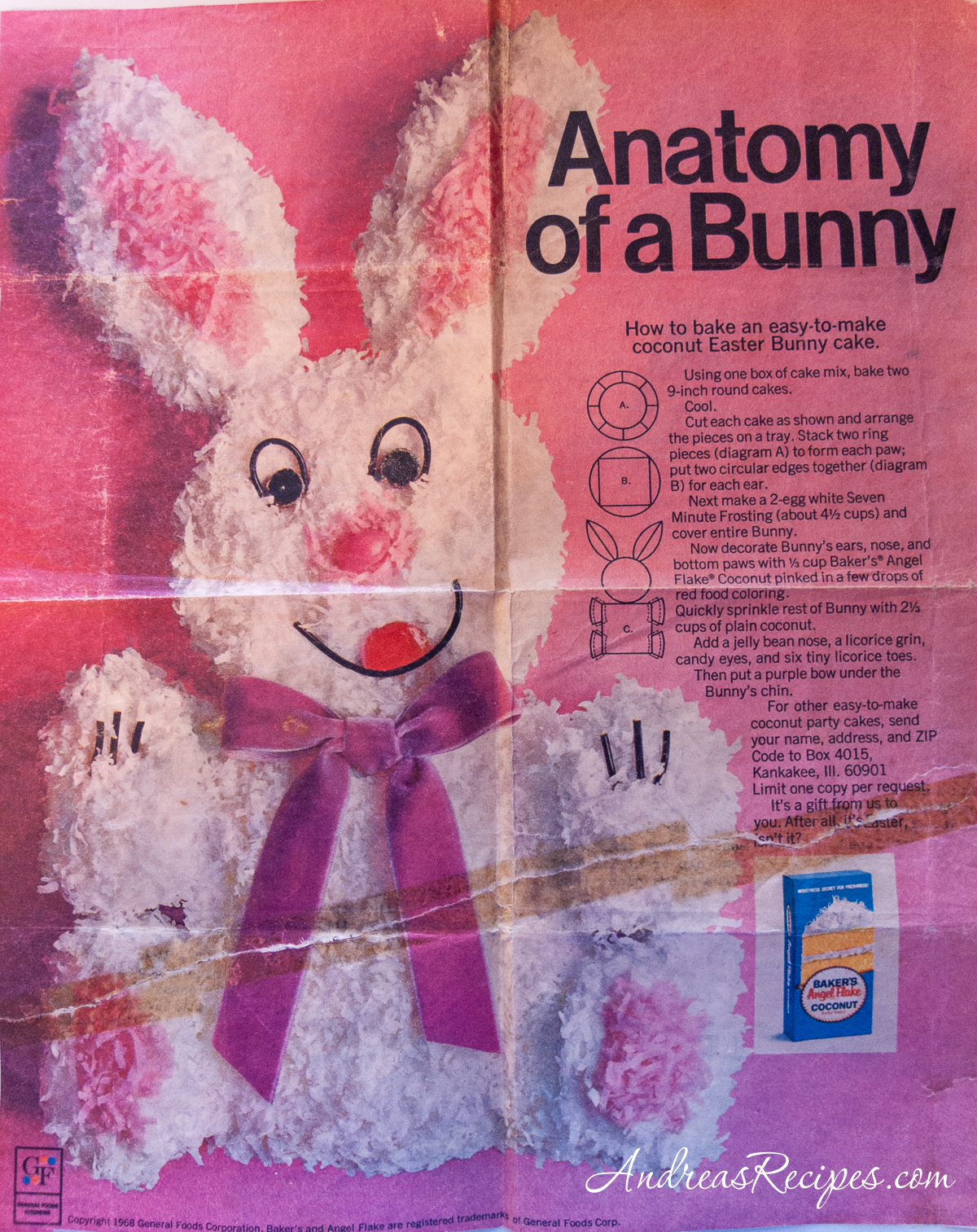 To make the bunny, you bake two 9-inch round cakes using whatever cake recipe you choose, though it should be a cake that isn't too soft because you need a texture that will stand up to carving and frosting on the open cut sides. We tried a Five Flavor Pound Cake recipe but skipped the soaking syrup, and it tasted great and worked very well for carving and frosting. (I plan to make that cake again with the soaking syrup and post about it separately.) After the cakes have cooled thoroughly, cut each cake according to the diagrams below and then place the pieces together. 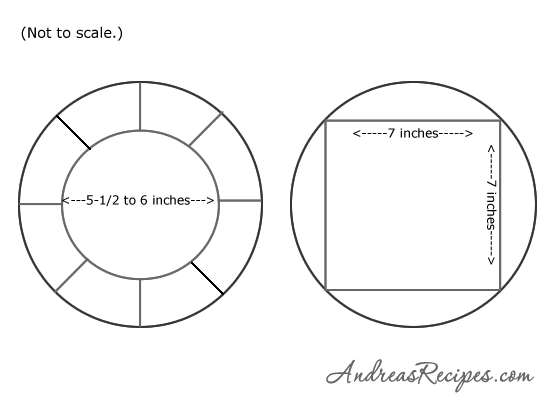 We used a plastic bowl as the pattern to cut the circle piece, then just cut the large ring into eight pieces. After frosting the cake, decorate with flaked coconut, jellybeans, and licorice. Instead of adding a bow, we made a "pearl' necklace out of jellybeans and named our bunny Pearl. 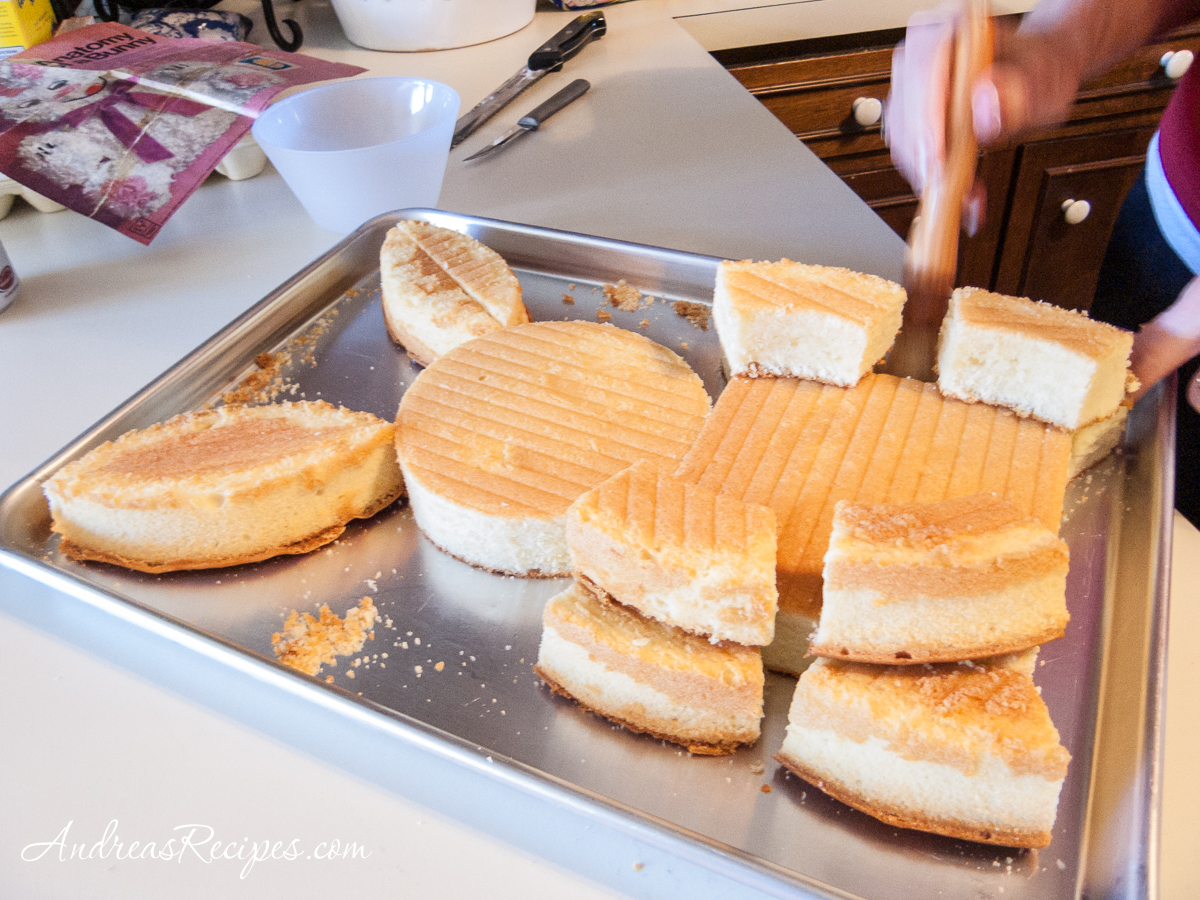 The instructions call for a two-egg white Seven Minute Frosting, a simple frosting made from sugar, egg whites, water, cream of tartar, and vanilla and mixed in a double boiler over medium heat. The recipe comes from an old cookbook that my paternal grandmother used for many years, and it makes enough to frost two 8-inch cake layers, so is not quite enough for this cake. I recommend making extra, perhaps another half batch if you don't want leftovers, or just doubling the batch if you want copious amounts of frosting. 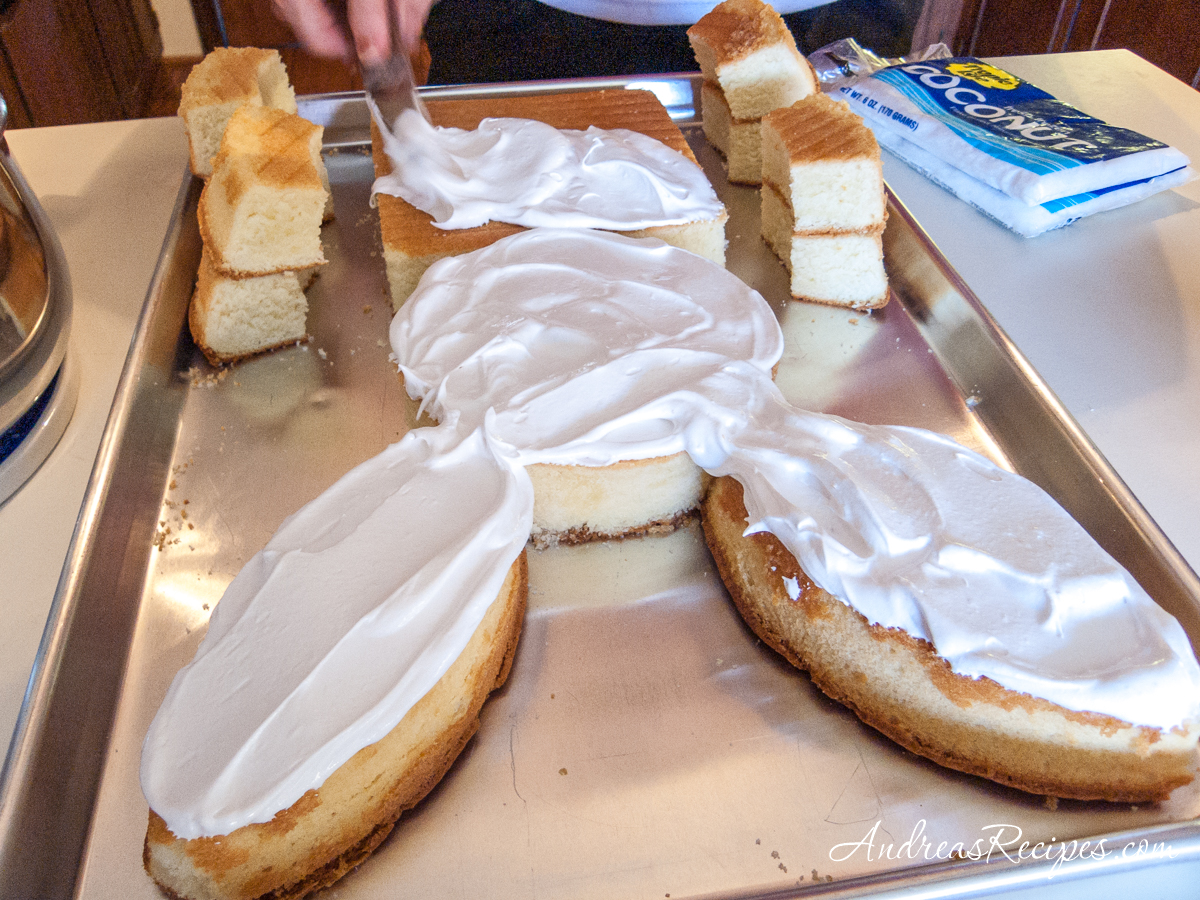 My grandmother's cookbook is called The Pocket Cook Book, a small paperback published in 1942 with about 500 pages and 1300 recipes. Some of the pages have notes written by her and the spine has been taped several times. The book was published during a time when frugality was encouraged due to the need for materials during World War II, and the book has some references to that time. On the very first page before the title page, there is a message in italics, which reads, "In order to cooperate with the government's war effort, this book has been made in strict conformity with WPB regulations restricting the use of certain materials." WPB stands for War Production Board, an organization established by executive order in 1942 which was responsible for regulating materials necessary for the military efforts during World War II. There is also a chapter called Penny Stretchers, which has a list of all the recipes in the book that can be made on a budget, "For all those dark moments when the kitchen cash box is almost empty and inspiration for appetizing economy dishes seems to have fled forever..." And it closes with the admonition, "Waste nothing! The promise to war against waste is part of our government's Consumer Pledge. Be sure nothing wholesome or edible ever sees the inside of your garbage pail." The pledge the book refers to is The Consumer's Victory Pledge created by the Office of Price Administration which was tasked with protecting the war economy from rampant inflation through price controls. Homemakers were asked to sign a pledge stating:

As a consumer, in the total defense of democracy, I will do my part to make my home, my community, my country ready, efficient, strong.

I will buy carefully--and I will not buy anything above the ceiling price, no matter how much I may want it.

I will take good care of the things I have--and I will not buy anything made from vital war materials which I can get along without.

I will waste nothing--and I will take care to salvage everything needed to win the war.

Looking through the book and my subsequent readings on food and materials rationing during that era has been an exercise in peering into the minds of my grandparents, and gives me more of an appreciation for what it was like to have food rationed and to truly work to make your food dollar go as far as possible.

I went to visit my parents this week knowing that I would make a cake which would bring back wonderful memories, but not knowing that it would lead me down a path of research into an era that profoundly influenced my grandparents and my parents. Apples & Thyme is a food blogging event that celebrates time in the kitchen with our mother's and grandmothers, and making this cake with my mother was certainly a celebration of some wonderful food memories. Visit Vanielje Kitchen for more information on the event and to read the inspirational stories from other food bloggers.

Make it Gluten-Free or Dairy-Free

Use a gluten-free or dairy-free cake. 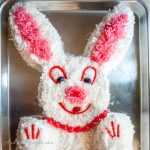 You can prepare the cakes and coconut a day ahead. The frosting is best used on the day it is made. 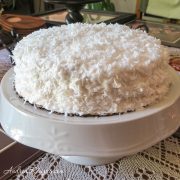 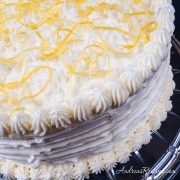